Nipple correction surgery is a procedure that we often combine with an areola reduction (the areola is the darker area surrounding the nipple), breast augmentation, breast lift or breast reduction. The procedure can correct inverted nipples, address enlarged or asymmetric nipples, shorten the nipple length and width or raise them to a higher position.

Nipple Correction Before & After Photos 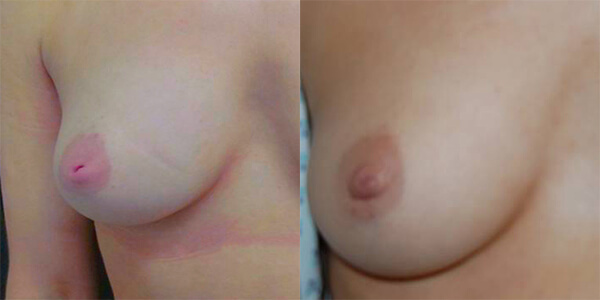 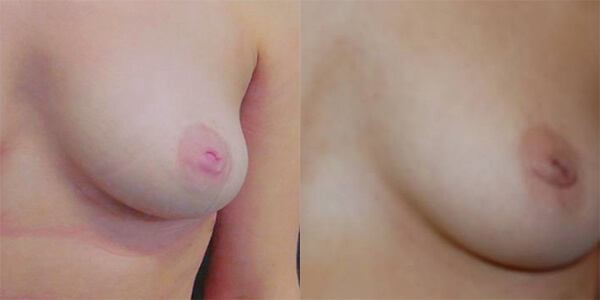 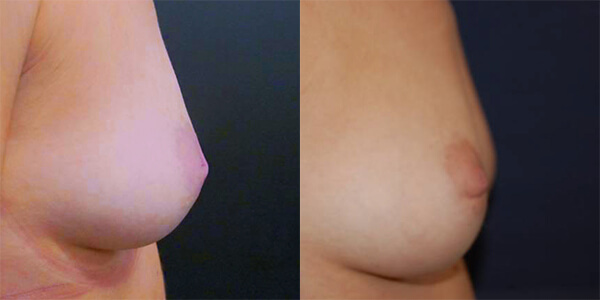 The approach to surgery will depend on the cosmetic concern that you’re looking to address. There are many nipple variations. One nipple may protrude, while the other may be inverted, but they’re all normal.

The surgeon will make a small incision along the centre of the nipple, through which they will pull the nipple out by releasing the tethered fibres, so it protrudes naturally. They will then close the incision with a stay suture that holds the nipple in the outward position. Following this, your surgeon will wrap a dressing around your chest. Occasionally, we can resolve this with the use of dermal filler.

For a nipple reduction, the incision is discreet within the areola where the surgeon will remove the unwanted tissue to reduce its size or reshape it. They may repeat the process on both nipples to achieve optimal balance. We often combine this procedure with an areola reduction to reduce the size of the darker area surrounding the nipple.

This operation is minimally invasive, quick and has virtually no downtime. We can also perform this operation with a local anaesthetic. The surgeon will make a small incision to remove the nipple and close it with an inconspicuous scar.

Your surgeon will make a small incision around the areola and remove the nipple and areola and move it to a more natural position. The surgeon reconnects the nipple back to the nerves and blood vessels.

The procedure is suitable for anyone who:

You should see immediate results, but optimal results will show after around two weeks.

After ten days, the nipples should be healing well, but optimal results will show between 3-6 months.

After around two weeks. You may have a small scar which will fade over time.

Results will be immediate, but you may have swelling that lasts for a few weeks.

Downtime is minimal so you can return to work immediately but should try to avoid vigorous exercise for the first week. We remove the stitches after one week. We’ll encourage you to avoid wearing tight clothing for up to 6 weeks and to make a hole through your bra, so the nipple doesn’t revert inwards. You may encounter sensitivity or changes in nipple sensation that can last six weeks.

You should be able to return to work as soon as you feel ready. You will experience some swelling and soreness for the first week or two after your nipple correction. The stitches are absorbable and won’t require removal. The nipple usually heals within around ten days. The surgeon may recommend that you wear a protective garment to aid recovery.

Overall recovery is around a week. The stitches we use are usually absorbable so won’t need removing. We may require you to wear a surgical dressing.

A nipple reduction may leave a small scar depending on the technique. We can improve its appearance with laser treatments and Endermologie.

In some cases, we may be able to address your concerns non-surgically. For example, if you would like to enhance the projection of the nipples or prefer a more erect appearance to them, we could inject dermal filler to augment them.

Some surgical approaches involve cutting the milk duct, which can implicate your ability to breastfeed. Your surgeon will discuss this with you before your nipple correction surgery.

This surgical technique will pull out the nipple so that it can project efficiently. The operation is relatively straightforward and involves releasing the tethered ducts or tissue that are causing the nipple to retract inwards.

Inverted nipple correction surgery can hinder your breastfeeding abilities. Still, at 111 Harley St., we deploy a technique to release the tissue in a way that does not interfere with the milk ducts and will preserve them to the best of our ability.

A nipple reduction may reduce the nipple length, projection and width. For women, nipple and areola size often change in size. After pregnancy, the nipples can change with breastfeeding as the milk ducts expand so some women will have a nipple reduction surgery in combination with other enhancing procedures as part of a mummy makeover.

An unwanted nipple size can also occur as a result of hormone fluctuations, genetics or congenital abnormalities.

Men can also be suitable candidates for this operation. When there’s higher than normal levels of oestrogen that are present in the body, this can cause the nipples to elongate or enlarge. We can reduce the nipple size as part of a surgical operation known as gynecomastia which addresses excess breast tissue as well.

On some occasions, a patient may have a third or additional nipples that require removal. We can perform this operation safely, quickly and efficiently within our surgical clinic facilities without the need for you to go into hospital. It’s a minimally invasive operation that offers little downtime.

We understand that the price of cosmetic surgery can be a crucial deciding factor for many patients. However, there is no one size fits all. Everyone is different which is why we do not publish our surgical fees on our website. Our aim and philosophy is to be the best and provide the highest standard of care, not to be the cheapest provider.

To request a surgical consultation with our surgeons please complete this form.